Located in the most southern part of France, the province of Languedoc is an area with scenic landscapes and a beautiful climate. Bordering the Mediterranean Sea to the east and the Pyrenees Mountains to the south, the region provides visitors a lovely variety of landscapes to cycle through.

The South of France with its warm, inviting climate and ancient heritage, offers visitors a combination of relaxation, adventure, and a step back in history. Whether it is riding along the Canal du Midi on the Garonne River, visiting one of the many Cathar castles, the medieval city fortress of Carcassonne, or just relaxing by the Mediterranean Sea while drinking some local Corbieres wine, there truly is something for everyone in Languedoc and southern France. 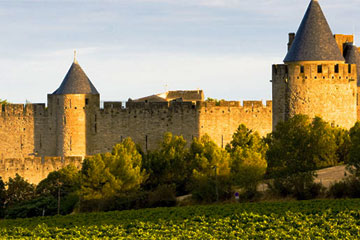 Cycle through 5 UNESCO sites in one bike trip in Languedoc! From Montpellier to Carcassonne, your days will be rich with new historically significant highlights such as the Santiago de Compostela pilgrimage route, Canal du Midi and the Cathar Country.
Duration : 7 Days / 6 Nights Price from : 1490€
Trip : Self-guided Activity : Hybrid
Level : 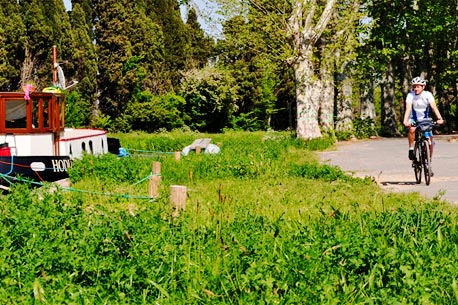 This cycling trip in the Languedoc (Occitanie) region takes you on a journey along the Canal du Midi and on the coast of the Mediterranean Sea. On your last riding day, a wine tasting and delicious oysters from Sete are included.
Duration : 7 Days / 6 Nights Price from : 1290€
Trip : Self-guided Activity : Hybrid
Level : 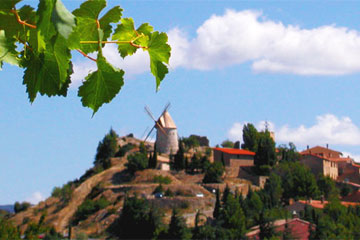 Start in Carcassonne, a UNESCO world heritage site in the South of France. Experience the Cathar Country which was recently made famous by the Da Vinci Code, and finish in the charming village of Collioure by the Mediterranean Sea. This trip is perfect for e-bikes.
Duration : 7 Days / 6 Nights Price from : 1190€
Trip : Self-guided Activity : Hybrid
Level : 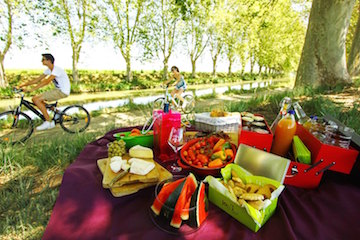 Our Languedoc Wine & Cycling Tour exhibits the wonderful natural variety of vineyards in Occitanie (one of the largest wine producing regions in the world). On your way from Toulouse to Montpellier, you will visit charming villages like Revel, Saissac, Capestang and Cournonterral.
Duration : 7 Days / 6 Nights Price from : 1690€
Trip : Self-guided Activity : Hybrid
Level : 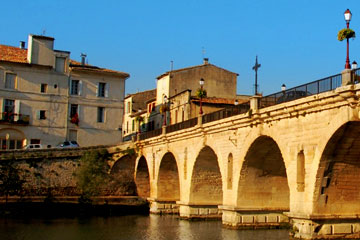 Discover what the Languedoc region has to offer beyond the beaten track. The adventurous among you will enjoy the added mountain biking, adventure park zipline experience and the canoeing in the Gorges of the Gardon River. Excellent choice for families with bigger kids.
Duration : 8 Days / 7 Nights Price from : 1550€
Trip : Self-guided Activity : Hybrid
Level : 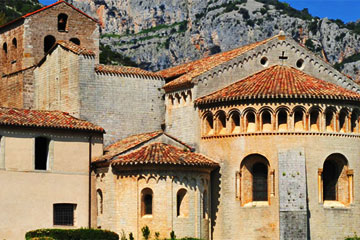 This cycling trip is a great alternative, as it explores the less known, but equally fascinating backcountry of Montpellier, including Pic St Loup. You will visit many of the locals favorite places including Roman historical sites of Nîmes.
Duration : 8 Days / 7 Nights Price from : 1370€
Trip : Self-guided Activity : Hybrid
Level : 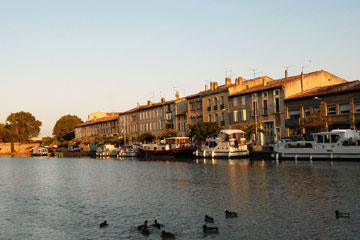 Riding your bike from Moissac to the Mediterranean coast is a peaceful experience. You will cycle along the Garonne river under the century-old trees, visit the "Pink City" of Toulouse before making your way to medieval Carcassonne.
Duration : 7 Days / 6 Nights Price from : 1390€
Trip : Self-guided Activity : Hybrid
Level : 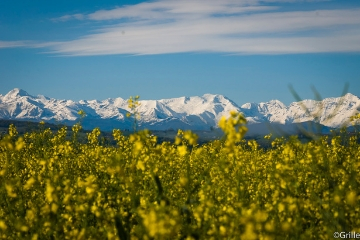 The most beautiful villages of France

Starting in Gaillac, this cycling trip brings you to Albi, a UNESCO World Heritage Site. You will discover villages officially recognized as Most Beautiful Villages of France including Gaillac, Najac and the Gorges of Averyon.
Duration : 7 Days / 6 Nights Price from : 1290€
Trip : Self-guided Activity : Hybrid
Level :

2 500 years ago, the olive trees were brought to southern France by the Greeks. The olive trees of Languedoc grow dry little black olives or juicy big green ones. Olives and olive oil are on all outdoor markets. This region consume 50 000 tons of olive oil per year! Make sure you bring some home.
The gastronomy from the South of France consists of dishes with eggplants or zucchini: Aubergines a la tomate (eggplants with tomatoes), Aubergines aux cepes ( eggplants cooked with mushrooms), Courgettes farci (Stuffed Zucchini) are to name a few. We also find influences from the Catalan culture with Cod, turkey, or chick peas “à la Catalane” - Catalonian Style.

Languedoc also has some great wines with world famous names such as Minervois or Corbieres. The AOC wines of Languedoc covers 120,000 acres of vineyards on the slopes and “garrigues” of the South of France. AOC is a guarantee of the quality of wine and it is the highest French wine qualification.
The region produces red wine, pink or rosé, and white wines. The diversity of soils makes it possible to produce wines of different types, and the differences are carefully maintained, with a constant eye on quality. Among many, we can name:

The Languedoc region in the South of France is located between the Atlantic Ocean and the Mediterranean Sea and therefore has always been an extremely important trade route.
It is composed of 5 departments: Lozere, Gard, Herault, Aude, and Pyrenees Orientales and its landscape is varied with farmlands and countryside on one hand, and important cities such as Montpellier, Perpignan, Beziers and Carcassonne on the other; and with vineyards as well as beaches on the coastlines of Languedoc.

Tourism will very soon overtake agriculture as the most important economic activity. The wealth of the natural heritage and history, and the mix between ocean and mountains give Languedoc plenty of options in terms of touristic activities; from water sports to spotting wildlife. Cyclists will also enjoy riding alongside the beautiful water, coastal stretches and quaint fishing villages.

The weather in Languedoc is mild to warm. Temperatures can range from 50 to 70 degrees Fahrenheit in the spring, 65 to 80 degrees during the summer months, and 55 to 75 degrees in the autumn season. Perfect for a cycling holiday!

The archeological and historical heritage is very important in Languedoc, relating from one of the oldest European Man (the Man of Tautavel, 450 000 years old) to Roman and Baroque churches and fortresses.

The population of the Mediterranean Sea arrived on the coast of Languedoc in the VI century BC. They introduced vineyards and olive production. The Phoenicians founded Collioure and Agde. Originally from Minor Asia, the Greeks of Phocee founded Massilia ( Marseille). The Masseliotes (inhabitant of Marseille) took control of Agde and it became an important commercial trade center between the Mediterranean and Northern Europe.

Around 120 BC the Romans conquered this southern region, Narbonne in 118 BC, then Beziers. In 27 BC, the Narbonnaise was created, a province that would correspond to today’s Languedoc.
The Roman history of Languedoc-Roussillon is long and has left some spectacular traces. The names of towns, the Catalan language, the region’s heady wines and olive-oil dishes all testify to the lasting influence of 400 years of occupation.

This is also a region where the “Cathars”, named after the Greek “katharos” or “pure”, fought the Catholic church in the 13th century. It took many decades to exterminate this movement whose followers believed the visible world to be the work of the devil. Nowadays, many impressive fortresses perched on dizzying heights and the ancient villages still bear witness to this lost religion.

The term "Languedoc" appeared in the XIII century to designate all the landmarks where it was said "oc" for "oui"(yes) by opposition of the Northern provinces where the dialect "oil" was spoken. The Occitan language was composed of several dialects: the gascon, the limousin, the auvergnat, the provencal, and the languedocien. In 1919, the Escola occitana school was created and in 1945 the Institut of Occitana studies to keep the language alive. It is indeed a national treasure as it holds 160,000 words versus 30,000 in French!