Located in the northeast region of France, Champagne is probably best known for the sparkling white wine to which it lends its name. But this beautiful region offers so much more than a famous bubbly beverage. With a long history and rich heritage, visitors will not only experience some of the best wine tasting the world over, they will also encounter a rich history filled with wonder and beauty.

Ancient castles, fortresses and countless vineyards coupled with delectable cuisine afford visitors a delicious, unique, and unforgettable journey.France is home to some of the most beautiful places on earth, and the Champagne region is no exception. With its beautiful landscapes, ancient heritage and world famous vineyards, Champagne offers a travel experience second to none. 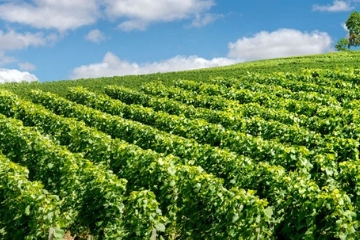 In the early Middle Age period, Champagne France was a duchy under Merovingian rulers. By the 10th century, the duchy of Champagne became a hereditary estate known as the county of Champagne. Then, in the 12th and 13th century, the county became well-known for commercial fairs where merchants from all Europe were present. At that period, the Capital was the city of Troyes. Finally, in 1314, Champagne became a province of the royal domain of France when the count of Champagne , who had inherited the area, succeeded as Louis X, king of France. The successive wars of the Revolution, the Empire and the beginnings of the Republic left, until the signing of the Reims Armistice in 1945, painful scars of history on the soil of Champagne.

The Champagne-Ardennes region is rich in events that made history of France and has preserved several vestiges such as the Cathedral of Reims. For a thousand years, the cathedral was one of the privileged places in French history, providing the setting for the coronation of kings. Mostly built during the 13th century and completed in the 15th century, this monument is a masterpiece of Gothic architecture, remarkable not only for its architecture but also for its dimension.

ON OUR CHAMPAGNE CYCLING TOUR:

To visit on the Marne route: Domaine de Bacchus in Reuil, Statue du Pape Urbain II in Chatillon sur Marne: this statue, dedicated to Pope Urbain II, was launched in 1887. Urbain II was born in Chatillon sur Marne around 1040. Château de Boursault: inspired by the famous château Chambord in the Loire Valley, this castle was built between 1843 and 1848 for Madame Cliquot, owner of the Champagne producing company Veuve Cliquot. Ecole 1900 in Oeuilly: an ecomuseum with the reconstitution of a school and a village from the early 1900s.

TO VISIT IN REIMS:

Cathedral Notre dame de Reims; Roman remains, with the oldest monument in Reims, the Porte de Mars ("Mars Gate", so called from a temple to Mars in the neighbourhood). Palace of Tau, an archiepiscopal palace, built between 1498 and 1509, and in part rebuilt in 1675, which was occupied by the kings on the occasion of their coronation. Place Royale, with a statue of Louis XV, and the Place Cardinal-Luçon, with an equestrian statue of Joan of Arc. Geography

Champagne consists mainly of a chalk plateau and is best known as the home of the sparkling white wine: the Champagne. 30,000 hectares of Champagne vineyards stretch as far as the eye can see over the rolling hillsides, dotted with picturesque villages . Most of the exported French champagne comes from the area around the cities of Reims and Epernay. The Champagne region is also known for the raising of sheep and the manufacture of wool being part of the economy.

Important Champagne houses and small producers alike await the visitor to be able to share their passion: Mumm, Mercier, Moet & Chandon, Joseph Perrier, Perrier-Jouet, Taittinger, Veuve Cliquot, and more. (you can visit all thoise places on our Champagne cycling Tour)

Most of the Champagne vineyards are between Reims and Epernay. Only Champagne produced in this region has the right to call itself "Champagne". Other versions are often called "sparkling wines"which contributes to why the true Champagne is so expensive.

5 MAIN REASONS TO DISCOVER THE CHAMPAGNE :