Located on the east side of France, on the border with Germany, Alsace Lorraine is a mix of cultures. The region offers an amazing experience for tourists seeking a combination of European cultures, breathtaking scenery, and outdoor activities second to none. One of the most popular activities of locals and tourists in Alsace is cycling.
Known worldwide for its picturesque villages with typical houses, ancient churches and historical castles, Alsace is also famous for its vineyards. The Alsatian wine route is one of the most popular and allows you to sample some of the delicious wines such as Gewurztraminer, Riesling or Pinot Gris.
Alsace Lorraine is also home to the Vosges, a range of low mountains that are part of two Natural Parks. With challenging terrain and extensive trails that border Germany, biking the Vosges Mountains will provide an experience not soon forgotten.
Visitors to the region come to relax and unwind, enjoy regional Alsatian gastronomy and wine and cycle in one of the most beautiful settings in France. 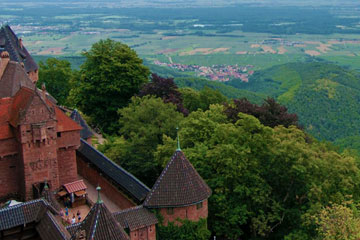 Nestled between the Vosges mountains in France and the border of Germany, Alsace offers a unique hiking experience. You will walk the Alsatian wine route, the famous Route du Vin, from Strasbourg to Colmar, going through villages producing some of France's best wines.
Duration : 7 Days / 6 Nights Price from : 1090€
Trip : Self-guided Activity : Walking
Level : 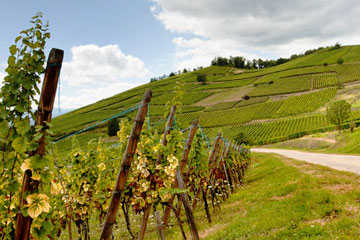 Start your Cycling Tour in Strasbourg, easily accessible by high speed train from Paris. In 7 days, you will discover the famous Alsace Wine Route and visit a number of historic villages. Taste wines from the microclimate of Itterswiller on day 4, when a wine tasting is included.
Duration : 7 Days / 6 Nights Price from : 1350€
Trip : Self-guided Activity : Hybrid
Level :

The Alsatian cuisine is very similar to the German one. The Alsatian sauerkraut, better known as Choucroute, is world famous. It consists of fermented cabbage with a combination of pork meats. The Quiche Lorraine is also quite famous. It is a salted pie with ham, cream and eggs. It appeared at the end of the XVI century and came from the German word "Kuchen" which means Cake.

You will also be able to sample a few cheese specialties such as the Munster and the Géromé. Both are smelly but good!

Alsatian wines are famous; the white ones have a distinctive flavor due to the continental climate. With seven varieties of wine to choose from, including six white and one red, there is certainly something to please every wine drinker here. Among the Alsatian white wines of quality you probably know the Riesling, Gewurztraminer, Alsatian Pinot Gris.... Make sure to take the time to cycle on the Alsace wine route and taste some of the best wines!

Alsace Lorraine is located on the East side of France, at the border with Germany.

Spread on the plain of the Rhine River and on the oriental side of the Vosges mountain range, Alsace offers diversified landscapes. Some old cities include: Obernai, Riquewihr, Kaysersberg, Colmar. Lorraine is the occidental part of the ancient Lotharingie which has given its name to the region.

Shared between Lorraine (west) and Alsace (east), les Vosges are an old mountain range covered with pines and beech forests. It is a region with numerous lakes testifying to the presence of ancient glaciers. Les Vosges are also rich in thermal spas with such as Vittel, Plombieres, and Contrexville.

The History of Alsace is quite chaotic as the region was successively part of France and Germany. After the partitioned empire of Charlemagne in the 800s, Alsace became part of Lotharingia and later part of the German duchy of Alemannia. It then remained German for 800 years. In 1648, with the "Thirty Years War", Alsace was placed under the French sovereignty. But after the Franco-Prussian War (1870-1871), Alsace and Lorraine were incorporated into the German Empire which was when the term Alsace-Lorraine was used for the first time to name this region.

In 1919, after World War I, Alsace-Lorraine was returned to France by the terms of the Treaty of Versailles. But during World War II, after France’s capitulation, the territory was ceded to Germany again. It is only after Germany's defeat in 1945 that France regained Alsace-Lorraine. What a story!!

In Alsace and Lorraine, the French language is dominant. The Alsatian dialect, close to the German language, is still spoken but its use is decreasing. Because of the past, the culture of this region contains both French and German elements, which makes it a unique place to visit.